They left the shores of the United State heading to the place they call home- Sierra Leone.  Their aim like many migrants  who travel back  to there home countries around festive seasons was a high hope of spending the New Year with their loved ones. Unfortunately, their journey, hopes and dreams got caught short at the Rogbere Bridge in the Port Loko District. They came face to face with the Angel of Death when the  green 4×4 vehicle in which they were traveling  sumasulted over the Rogbere Bridge into the deep river.

For  the victims and their families, It  was meant to be a year ending in joy, laughter, fun, party and good memories. Sadly for the family members and friends who are still alive, it is now a  year ending in regrets, tears and bad memories they will not forget this soon as they prepare to lay to rest the remains of their loved ones.

Many  migrants who visit Sierra Leoan around festive seasons make the journey for various reasons. Most commonly, to escape from the harsh realities  of  a busy work year of daunting jobs and long shifts. People also make this priceless journey so as to  bond with loved ones, share goodies and the fruit of their hard earned labor  with family members and friends. For some, it is also a time to inspect the progress or asses the result of some of the  projects they have been funding and had entrusted its supervision or execution in the hands of family members. Most diasporians make regular remittances to their home countries to fund  diverse business ventures or  construction of  mansions whiche is considered as their investment for when their retirement. I am sure for our victims the reason for their travel were no different for majority of the migrant. Our estimation suggest that the final destination of our victims from that where the accident occurred  was  less than a hundred miles. Sadly, theirs was a journey that was never meant for a happy ending.

It is still unclear what the  true identity of the victims are or the real cause of the accident. Also, it is still unknown how many people that were onboard the Jeep  Wrangler that sumasulted into one of the oldest  bridges in the country built during the colonial era.

Pictures floating around Social Media so far shows  about five corpses; three male and two femal  pulled out of the river by local youths who used local boats, logistics in executing an improvised, creative and brave rescue mission. Our media team has not been able to acartain if the Sierra Leone Police has yet to visit the scene of the accident.

Eye witnesses suggest that the accident happened around 11:00pm GMT on Sunday, December 27th, 2015.  Various postings on Social  Medial reported that the Vechicle was coming from the Lungi International Airport using the Port Loko Road to enter Freetown after the Country’s  Ferry can not accommodate any more vehicles.

Usually because of  time constraints, realibility and safety,  travelers prefer  to use the Port Loko – Freetown  Road to or from the Lungi International Airport. The Lungi to Freetown Journey  using the Port Loko rout is now about 2 hours journey since the reconstruction of the Road by the President Ernest Bai Korom lead APC Government.

One forum reports that the driver of the vehicle who also died in the accident was a young man, named Mohamed Lamin  in his mid twenties  who went to pick up his dad and other guest traveling  in from the United States.

Their are unconfirmed reportssuggestingn that the driver who was unfamiliar with the narrow and dark road was driving way above the speed limit. For many roads in the provinces, the legal speed limit is less then 50 Mph and even leess dependent on the condition of the road. These reporters are now alleging that the cause of the accident was as a result of over speeding.

The length of the Rogbere bridge is about  100 meters long and safe speed limit  is about 5-10MPH. Despite the road being a two way traffic,it dilapidated condition meant that drivers has to negotiate a one way crossing. The  incoming traffic has to wait for the other vehicle to finish crossing before it can attempt to cross. Unfortunately, their are no formal signals to control traffic at this bridge. Therefore, alternating who goes first during heave traffic has to be left with the common sense and good judgement of the drivers to prevail.

May be it is a time for Governemnt to make road safety and reconstruction of major bridges a desperate priority in their infrastructure agenda.

How many more lives has to be lost before action is taken?

Sierra Leone News: Tragedy in Freetown As A Jeep Fell From Bridge Into River 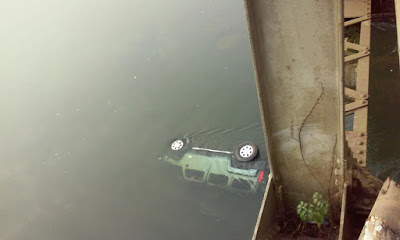 Sad to know that a Jeep from Lungi International Airport fell into a river at Rogbere  last night at around 11 pm, with some passengers in it. Unfortunately, the jeep sank down the river.
According to eye witness, they said the driver of the Jeep went to the Airport to pick some holiday makers from USA trying to reached Freetown with high speed and did not understand the road properly which led to the tragedy. Young men around the neighbourhood dived and were able to rescue the victims and rush them to the nearest hospital. More update later. See more pictures after cut…. 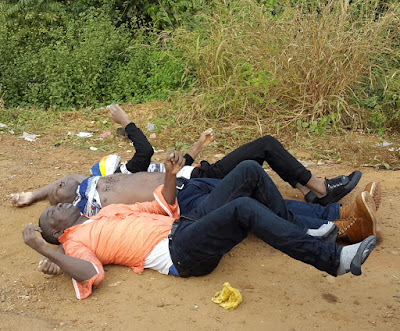 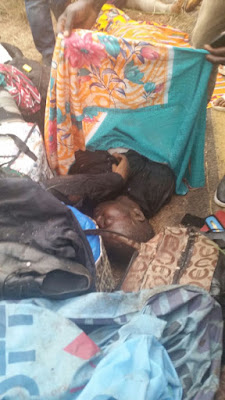 Posted by Mobolaji Joseph at 15:58