Brussels (AFP) – Leaders of the west African countries worst hit by Ebola urged the world on Tuesday to back a “Marshall Plan” to help them stamp out the disease and rebuild their shattered economies.

More than 9,700 people have died of the disease since the west African epidemic emerged in southern Guinea in December 2013, with nearly 24,000 people infected, according to the World Health Organization.

“The impact of Ebola on our economies has been profound. The most important long-term response to Ebola therefore rests in plans and strategies for economic recovery,” Sirleaf told the EU-backed conference.

“There is no doubt this will require significant resources, even a Marshall Plan,” she said, referring to the US-led aid plan that rebuilt Europe after World War II.

Conde also underlined the need for a “Marshall Plan”, telling a press conference that it was as if the region is “coming out of a war” with its economy and public services decimated.

The Brussels conference, focused on enlisting help in stamping out Ebola and rebuilding the countrie …

The International Monetary Fund (IMF) in Washington approved on Monday funding and debt relief worth about $187 million for Sierra Leone for coming years, with $85 million of that to be disbursed immediately.

The charity Oxfam has previously made similar calls for a Marshall Plan-type effort to help stricken west Africa.

The countries at the centre of the Ebola epidemic are forecast to lose 12 percent of their combined gross domestic product this year, according to World Bank estimates.

In addition, their health sectors have been partially wiped out by the epidemic or forced to divert resources to fighting Ebola at the expense of other diseases like measles, malaria and AIDS.

The conference’s lead participants stressed in their closing statement the “importance of maintaining international engagement with the recovery and development process in the Ebola-affected countries.” 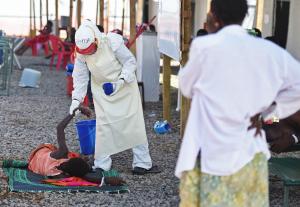 They indicated the subject would be tackled during the April meeting of the IMF and the World Bank as well as other high-level talks being offered later by UN Secretary General Ban Ki-moon.

The Brussels conference gathered the three African leaders plus scores of delegations including the European Union, China, the United States, Cuba and Australia, plus the United Nations, the World Bank and other international organisations.

The African leaders repeated a pledge made last month to eradicate the disease by mid-April. 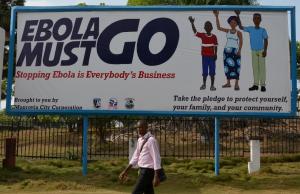 More than 9,700 people have died of Ebola since the west African epidemic emerged in southern Guinea …

“We must guard against complacency. There will not be total victory until we get to” zero cases, Koroma said. “We must be ever-ready to aggressively combat this outbreak.”

UN Ebola envoy David Nabarro said on Monday that the number of new cases had declined from around 900 a week to 100, but that cases appeared to be climbing back up in the coastal regions of Sierra Leone and Guinea.

The conference’s lead participants underlined in their concluding statement that “the principal objective is stop all transmission of the virus” but acknowledged much work lay ahead to achieve the goal.

“This will require continued political engagement, a sustained level of funding and the constant mobilisation of technical staff and specialised assets,” the statement said.

Countries around the world have so far pledged $5.1 billion to fight Ebola, with $2.4 billion disbursed until now, according to the statement.

Another $400 million will have to be disbursed quickly in order to eradicate the disease, Claus Haugaard Sorensen, a senior official with the European Commission, the EU executive, told AFP.

Ebola, one of the deadliest pathogens known to man, is spread through direct contact with the bodily fluids of an infected person showing symptoms such as fever or vomiting.