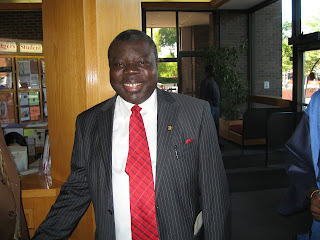 AMBASSADOR BOCKARIE STEVENS
By Anthony Abdul Karim Kamara, Jnr.To many Sierra Leoneans, Bockarie Kortu Stevens has done a remarkable job since assuming the office of Sierra Leone’s ambassador to the USA. Whether it is in working with other well meaning Sierra Leonean organizations to refurbish the once dilapidated embassy to the formation of Sierra Leone Arc of Hope, an organization that is working desperately to raising funds for the construction of the state of the art hospital in Sierra Leone, his supporters will tell you there has never been an ambassador like him here in the USA. Many in the community I spoke to were also quick to point out that because he takes time out of his busy schedule to attend to community events and endeavour to know his compatriots by name, it is clear he seeks the interest of those he is here to represent.Not surprising are his critics, who contend that had he been more focused and not self serving, he could have done more than the little things that he is been hailed for. Being an ambassador is much more than keeping your office clean and knowing your people by name, they commented. It is about helping to improve lives in a country where a vast majority of populace live in abject poverty, they continued. The continued problems at the APC – NA has also not been very kind to him. Many within the party claim he is the source of all the problems.

Even as he attends to Sierra Leone’s affairs with his boss, President Koroma who along with his counterparts from around the world meets in New York for the 64th session of the United Nations General Assembly, he eagerly responded to questions I posed to him about claims being circulated by a majority of members in his party.

AK: The North American arm of the APC has been in turmoil for quite a while. The issues within the party which are supposed to be internal have spiralled out of control with so much name calling. Unfortunately, you as ambassador, who also happen to be a member of the party has been labelled as the one who has created all these troubles? What is going on in the party?

Stevens: As a political party as popular as the APC Party, issues of this nature are not uncommon. The only diversion in this case is when people try to use the electronic media to vent out long harboured grievances and castigate people’s character. My interest in the APC is to see the party fulfill its programme for the development of Sierra Leone.

AK: In his last visit, VP Sumana was able to settle the in party fighting which led to the re-instatement of Osman Conteh to his position as Chairman. What led to his suspension in the first place? And why has his executive been dissolved again a week before President Koroma is to visit the US for his second UNGA in New York?

Stevens: It was not the Vice President that restored Osman Conteh. The Vice President together with the Executive of the branch appointed an Advisory Council of four to look into the issue and plot a way forward for the Branch. I reluctantly accepted the chairmanship of that body.

AK: Some have alleged that you have a personal vendetta against the elected Chairman, Osman Conteh and your only concern is to seek your personal interest. There are also charges that instead of representing SL as ambassador to the USA, all your focus is on the APC. Instead of seeking the interest of the party, you are bent on destroying it. What is your response to these charges?

Stevens: I don’t know where a vendetta comes from. I voted in the committee to have him re-instated, I chaired the convention that brought him in as chairman. I don’t need his job. So where does hate come from. It will be ridiculous of me to spend all my time on APC. APC is part time that is done only at weekends.

My job in the USA is that of an Ambassador and not APC chairman. I have held very senior appointments in the APC party long before now in positions that are more important than chairman of a branch. Those who care to keenly observe my performance in the USA will judge me rightly not from those who do it out of malice. Go to the gates of the Sierra Leone mission in Washington and judge for yourself. Go inside the embassy and you be the judge. Meet ordinary Sierra Leoneans in the streets and you be the judge.

AK: Why is it that a neutral body independent of the current executive has not been temporarily formed so that party issues can be settled? The current advisory committee, it has been alleged, are those that are loyal to you. In fact, it is an open secret that they are all involved in causing the problems of the APC-NA. If they are, why should they be afforded an opportunity to run the affairs of the party and the others not allowed to? Why should all other chapters be banned except for five?

Stevens: The advisory body decided on the appointment of the Interim Committee and not Bockari Stevens. It was done unanimously by the four members of the Advisory Committee.

The Advisory Committee as I have already stated was set up by the executive at a meeting presided over by the Vice President in July 2009.

No Chapter has been banned. Chapters are supposed to be set up in accordance with the Byelaws. Each Chapter was given more than two months to consolidate their Byelaw requirement. What the Advisory Committee did was to include the interim committee and all the chapters that had complied with the Byelaws by submitting their membership list to the Secretary General. When the rest do that they should be automatically included in the interim body.

AK: The press released posted on our website informed our readers of “a directive from the National Party Headquarters in Freetown mandated the National Advisory body of the APC NA Branch for an “Immediate dissolution of the North America Executive Branch of the APC and the formation of an Interim Body that will organize a National Conference within a reasonable time frame is approved.” Was this directive from President Koroma, or Victor Foh or party elders?

Stevens: The Secretary General of the Party Mr Victor Foh had ordered the dissolution of the executive and the convening of a National Delegates Conference after conducting investigations resulting from the suspension of Osman Conteh.

AK: What steps are being employed to bring a speedy resolution to this mess? This must not be good news for President Koroma to come to the US and see that after so many months, the underlying issues have not been settled. Is he going to be the only one who can bring this problem to a peaceful resolution?

Stevens: The President as leader of the party of course will not be happy with the media frenzy of some of our party folks. However it is not every issue that arises within the party that should divert his attention from the important task of state. That is why the APC party has structures in place to deal with issues of this nature.

AK: What do you want to say to friends and supporters of the APC who are so angry and disappointed that this is left to happen and has dominated the media headlines? What is your message to the other camp which clearly is not on the same page with you?

Stevens: We are all “APCinnians.” We all belong to mother APC. Let wash our dirty linings at home. We are all humans and there are times that we see things differently but that should not divert us from the bigger picture which is the APC Party.

I urge them to seek redress within the confines of the party structures instead of sing the media to expose themselves. Since these media attacks I have not responded but I agreed to your interview to set the records straight.

My relationship with the APC in North America is a part time one based on mutual respect. The branch is under the tutelage of the party secretariat. I have no special interest in individuals. Whoever provides an effective and sound leadership for the Branch in North America has my total support.

AK: Unfortunately, we will not be able to complete all the questions I have for you due to your busy schedule in New York. Thank you for your time.

Stevens: You are right! Thank you too Abdul for reaching out.

A NARRATIVE ABOUT THE JANUARY 6th 1999 TERROR (told by Zainab Hawa Bangura, former UN Undersecretary for Children in Crisis)

London’s worst terror attack in more than a decade left four people dead, including the assailant and the police officer he stabbed, and at least 20 injured. A car traveled […]