We say in the United States of America that there are only two things guaranteed in Life. They are death and taxes. My book of faith, the Holy Quran, never mentions taxes as something guaranteed to us but did say to us: ” INA-LILAAHI-WA-INA LILAAHI-RAAJIOON.” From Allah we came, and to Allah we shall return. And so on the 2nd of July 2014, my son’s 22nd birthday Allah decided it was time for my Golden lady to return to him. 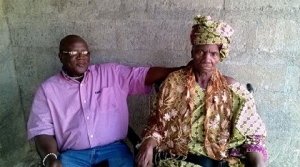 My Golden lady, my mom, Madam Fatu (Fofie) Zara Daboh was born four score and six years ago in the Simbaru chiefdom, Kenema district to a Gambian immigrant father, Ibrahim Fofana and a Sierra Leonean mother, Mariama Konneh. In the 1930s, the family moved from Simbaru chiefdom to Wonde chiefdom and settled in Fanima Wonde. It was in Fanima that Mohamed Karefa Daboh, (later Paramount chief Daboh 11 of Wonde, 1954-1998) a young entrepreneur and Islamic scholar in his own right met the Golden Lady Fatu Fofana. They got married and the union produced nine children, five of whom, Saudatu, Cillaty, Amie, Adama and Fode are alive today.

Fofie, as she was fondly known by all was a woman of integrity, compassionate, empathetic, selfless, loving and caring. Her smiles were infectious. Married in a polygamous home, she never wanted for her mates and their children what she did not want for herself and her biological children. Every child was hers. Fofie wanted the best for others more than she sought for herself.  Fofie was illiterate but she never allowed anyone to take her illiteracy for stupidity or ignorance. She was meek, which many people misinterpreted for weakness, but she was apt to show them the difference between meekness and weakness.

I have spent my professional life working with the underprivileged, from the homeless to prisoners to refugees to people with disability and so on. But was shocked at a moral question in social service that Mom asked me which in my estimation would have only come from a college degree thinker.

How many of us have been able to distinguish between been learned and been educated? Mom was not learned but was educated. She taught me to be caring for others and not to hate those I may think don’t like me. The opposite of love, she once told me is not hate but fear and feel of inferiority complex from those who may not like you. There are those who will tell lies about you, but advised me to forgive them, but also reminded me that final forgiveness is God’s work. If somebody wrongs you, she advised, let the person know it and move on. Because you cannot drive your car forward by looking in the rear view mirror, That’s why the windshield is bigger than the rear view mirror.

I had taken my Mom to a hospital in Atlanta on a Thursday evening in November of 1991.  It was drizzling and homeless folks were curdled under cardboards to avoid been wet. Mom asked me why people were curdled like that in the rain. I replied that they were homeless. We got to the parking deck where I had packed my car to retrieve it and Mom again enquired why the homeless cannot avoid the rain by coming into the parking deck. I told her the parking deck was for cars only. With wild eyes as if the heavens were falling, Mom quietly asked: “Cillaty Are you saying in America you have houses for cars and not for people?”

I took Mom on my many visits to the hard ware store where she saw me buy pesticides, fertilizer etc. for my yard. I would explain to her what those things were for and she would patiently sit and watch me do the yard work. After seeing me fertilizing the grass for growth and cutting it later, she got fed up with the routine and asked a poignant question as to why I waste money to buy fertilizer and spray on the grass to grow and end up cutting it and repeat the same process every now and then?  She told me “You white people are crazy” and they ‘black people’ meaning people in our village were smart. Because “ if we do not want the grass to grow we scrape it or burn it”. But does not see any sense in spending money to nurture the grass to grow and cut it again, not to mention repeating the process on a bi-weekly basis as I was doing. How many of us have thought of the arduous yard beautification work that way?

Mom’s “others first, self-last” mantra was vividly demonstrated in 1992. My sister and I wanted to surprise her and paid a non-refundable $600.00 deposit for her pilgrimage to Mecca that year. I took her to the pilgrimage orientation to a mosque that was not the regular we had prayed at. She started asking questions and wanted to know why we have suddenly changed the mosque. I told her my sister and I wanted to surprise her by sending her to Mecca and this was the authorized mosque for that. She told me while she appreciated our gesture, she will not in good conscience accept the offer, until her husband gave her the ok and only if the trip will be made with two of her mates who she considered sisters admonishing us that they also played a role in our lives to make us who we are today. And that whatever we do for her, we must do for them as well.

On May 10th 2014 I bade farewell to my Mom for my return to the United States having spent a month with her. Not wanting her to feel bad over my departure, I told her I was just going to Freetown and will return to her in two days. She looked at me in the eyes and said “you are lying”. I know you are going back to where you came from. I enquired why she thought I was lying. Her response was: “because you white people are liars.”  I reminded Mom I was her son and I am not white, but she reminded me also that I have lived in a white man’s country, that I no longer lived with her. And that makes me a white man. She asked me to stretch out my hands to her to pray for me. That was very emotional for me which made me shed tears.  It is a moment I will cherish to my grave.

Fofie is survived by her brother, Maahdi Kebah Fofana, chief Imam of Fanima Wonde, her ‘sister’ Haja Mariama Bona Daboh. Many children in and out of Sierra Leone. Many grand and great grandchildren. Many in-laws including Dr. M.B. Daboh, Hadji Daboh of Sierra Rutile, Kamorba Daboh of Fisheries, Fodei Umaru Daboh of APRM U.B. and Lansana Daboh of Gboyama Wonde and many others. Friends and other relatives include the Manneh and Jalloh families of Wonde chiefdom, the people of Wonde chiefdom, many friends and relatives at home and abroad including Yvonne  ( Arvon) Tucker-Akpan and Andy (Handy) Pratt of Atlanta Ga.

On behalf of our family, I want to thank all those who have mourned with us during these difficult times, sent messages of condolences and so on. We greatly appreciate your thoughts and prayers. Your prayers have kept us moving forward and kept us strong, holding to our faith and believing that our Mom is in a better place.

This May 10th 2014 picture, my last contact with her shows me with my Mom in Bo city.

May Her Soul rest with Allah

February 14, 2012 |  A secret letter written by Michael Von Schulenberg to the  United Nations ‘ Under – Secretary-General for Political Affairs, Lynn Pascoe, has been leaked to the  […]