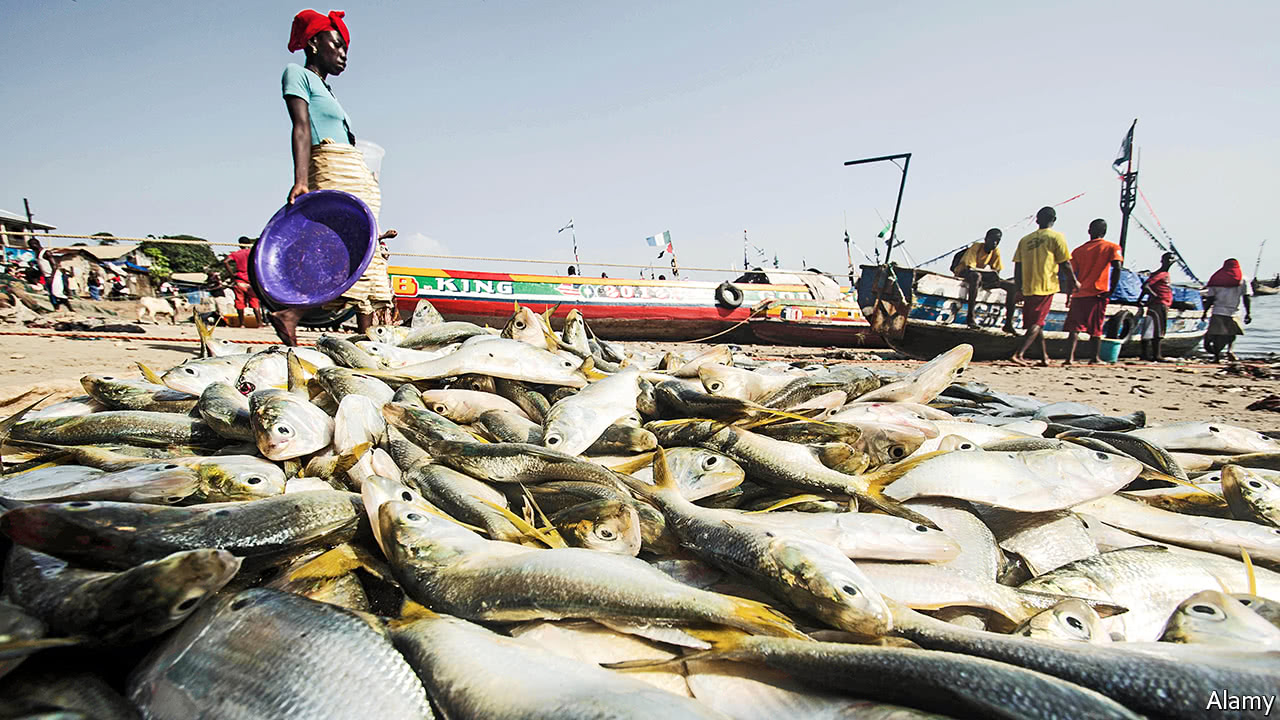 ONE evening in Tombo, as fish buyers throng the seafront, an argument erupts at the far end of the harbour. Angry voices waft through the air, as Pa Seaport, the master fisherman of Sierra Leone, tries to solve a heated dispute between local fishermen and a South Korean man. They accuse him of damaging their nets with his trawler, which, they say, was heading to an area where fishing is banned.

This squabble points to a much bigger problem. In Sierra Leone nearly half the population does not have enough to eat, and fish make up most of what little protein people get. But the country’s once-plentiful shoals, combined with its weak government, have lured a flotilla of unscrupulous foreign trawlers to its waters. Most of the trawlers fly Chinese flags, though dozens also sail from South Korea, Italy, Guinea and Russia. Their combined catch is pushing Sierra Leone’s fisheries to the brink of collapse.

Upgrade your inboxReceive our Daily Dispatch and Editors’ Picks newsletters.

Sierra Leone is not alone in facing this crisis. According to the UN’s Food and Agriculture Organisation, 90% of the world’s fisheries are dangerously overexploited. The Africa Centre for Strategic Studies, a think-tank funded by America’s defence department, reckons that about a quarter of fish caught off Africa’s shores are taken illegally. International observers, who have watched Sierra Leone’s fish stocks falling, are trying to help. In 2010 the World Bank gave money to a project to help the government police its waters. A $6m boat was built in the Netherlands and sailed to Sierra Leone. But the project was mired in controversy; there were claims that the Dutch shipbuilder, Damen, had paid backhanders to win the order. Last year the World Bank barred it from winning contracts for 18 months, and Dutch authorities are investigating allegations of bribery.

Moreover the boat has been out on only two patrols: the government says it cannot afford the fuel to do more. This leaves it with two inflatable boats donated by Britain and a handful of even smaller boats, none of which is big enough to go far out.

There are scant official data on the state of Sierra Leone’s fish stocks, but local fishermen have their own measure of the problem. Sulaman Kamara, Pa Seaport’s 33-year-old son, has been fishing since he was 16. “The fish are less, they are definitely less,” he says. “And the valuable types are disappearing. We used to get a lot of bonga and kine [barracuda]. Now they are rare. Sometimes the catch hardly pays for the boat’s petrol.” He blames foreign trawlers, saying they use nets with small holes that sweep up the baby fish.

Pa Seaport’s daughter and Sulaman’s half-sister, Kadiatu Kamara, is a government fisheries officer. She agrees that there are fewer fish, but says it is not just because of the foreign trawlers. She also blames locals who catch the fish as they breed.

Even so, a little boat might catch in a year what a trawler can take in less than two days. As young men like Sulaman pull in ever emptier nets, it seems high time that the government polices its waters.