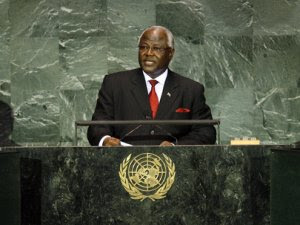 President of the Reupblic of Sierra Leone,

At the 64th session of the United Nations General Assembly, New York,

I feel highly honoured to address this distinguished Assembly once again. I would like to start by congratulating you, Mr. President, on your assumption of the Presidency of the Sixty-Fourth Session of the United Nations General Assembly and, to assure you of my delegation’s support and cooperation as you perform the demanding task of presiding over our deliberations this session.

Through you Mr. President, I would also like to convey my sincere gratitude to His Excellency, Monsignor Miguel d’Escoto Brockmann for the efficient and effective manner in which he conducted the previous session. My appreciation also goes to the Secretary-General for his comprehensive account of the work of the organization and his analysis of the challenges facing the global community.

The theme for this year’s session is apt and timely. It is only through dialogue amongst the different civilizations of the world represented in this deliberative body and the strengthening of the institutions and architecture responsible for promoting this dialogue that we could effectively meet the challenges posed by the current global crises. Dialogue promotes understanding; understanding enhances cooperation; cooperation gives vitality and legitimacy to the institutions and mechanisms that have been structured for meeting our common challenges and goals.

Civilizations began as magnificent blueprints for meeting challenges that were specific to particular regions of the world; but advances in technology and communications have made many problems no longer specific to particular regions. Climate change, HIV/AIDS, tuberculosis and the swine flu pandemics, the food and fuel crises, including the present global economic meltdown, terrorism, nuclear proliferation, and drug trafficking are all beyond the reach of any of the world’s civilizations to tackle without international cooperation. Whilst the major causes of these challenges may arise from particular regions, their impacts are global and affect the lives and fortunes of peoples of all civilizations. Dialogue amongst civilizations would create the synergies required to tackle the causes and impacts of the global crises.

My government fully subscribes to and supports the promotion of dialogue as well as the facilitation of the relevant mechanisms that helps to ameliorate the impact of the global crisis. Amongst some population groups, the impact of the crisis may be on the size of their bonuses; on others it may be on whether they acquire a second car or not. But for the vast number of people, particularly in Africa, the impact of the crisis creates life-threatening situations. Years of conflict had increased the number of poor and vulnerable people in my country. However, stable economic growth, remittances, and international financial and security support were increasing prospects for ameliorating the situation; but the present global financial crisis has suddenly decreased those prospects, pushing greater numbers of our people to extreme forms of poverty.

We in Sierra Leone are saddled with the effects of trade imbalances in international commerce. Our economy continues to be vigorously challenged by the falling prices of our exports in the international market. This includes diamonds and cash crops. The effect of this intractable problem is that we are not able to garner enough foreign exchange to import the basic commodities we need for sustenance. We are on the threshold of the tenth year of the implementation of the Millennium Declaration, and yet the prospects for achieving the Millennium Development Goals by 2015 remain dismal for Africa.

Many countries in Africa, including mine, have in the last few years registered important improvements in the essential areas of governance, economic and social indicators. My country, Sierra Leone is putting in place mechanisms to ensure stable democratic regimes. In Sierra Leone, worldwide indicators show that we have made the fastest progress in political stability.

Our economic growth remains strong at 6 to 9%. My government has firmed up the aspirations of our people in an Agenda for Change that sets out four clear priorities: agriculture, energy, infrastructure, and reforms to improve health and education service delivery. We are already delivering results on our priorities. Key roads are under construction, we have completed the hydro-electric project which is supplying clean affordable power to Freetown for the first time, and our reforms have ensured that we are the best performer among neighboring countries according to the Doing Business Index.

My government will not sustain these results without multi-lateral support. On November 18 and 19 this year, we will be organizing a Consultative Group Meeting on Sierra Leone in London to dialogue with investors, donors and other partners, and mobilize support for our efforts in tackling the many challenges facing our country. We see the Sierra Leone Conference as a problem-solving dialogue; we aspire to a conference that will build an action-oriented multi-lateral framework for meeting the challenges we face. My country believes in multi-lateralism; we believe in dialogue amongst nations as the most effective means for tackling the challenges that we face. We call upon all countries to ensure that the current financial crisis does not prevent the many African nations only recently removed from violent conflict to be denied the security and prospects for prosperity that we have all worked so hard to achieve.

I would like to address another issue my delegation takes very seriously, one that is interwoven with the financial crisis, poverty and development – the serious threat Climate Change poses to human development and to African nations. Despite scientific consensus that the Earth is warming at an alarming rate, progress in reducing greenhouse gas emissions and limiting global warming to below 2°C per year has proven elusive. Today, the poorest nations, who contribute the least to the phenomenon, are the most vulnerable. The recent torrential rainfall in Freetown, the capital of Sierra Leone, left scores of people dead, homeless and seriously injured. Drought, hurricanes, floods, the changing patterns of rainfall, rising sea levels and low crop-yields rank high among the key challenges facing the world’s poor. Unfortunately, those nations with the least resources are the most unprepared for such challenges.

Excellencies and distinguished delegates, it is our obligation to reverse the alarming rate of environmental destruction and depletion of our natural resources. It is in this regard that I wish to reiterate the African common position on climate change, which among other things urges the developed countries to cut down on greenhouse gas emissions by 40%. This is certainly not an ambitious goal. It is the least that we, the most vulnerable, deserve.

We believe that in addition to the necessity of investing in clean development mechanisms, the world’s developed countries must take a leadership role by providing adequate and predictable financial and technical support to less developed countries to foster effective adaptation as well as mitigation measures. We share the Secretary-General’s vision that the Climate Change Summit in Copenhagen “represents a unique and powerful opportunity at a critical moment in human history to steer humankind towards a safer, more stable, and more sustainable future.”

A final threat critical to future stability of nations around the world is the increasing proliferation of small arms and light weapons which, as former Secretary General Kofi Annan recently emphasized, are tantamount to weapons of mass destruction in slow motion, possessing the capability of destabilizing countries and entire regions. Given that many African countries routinely face political instability and violent threats, the need for strengthening national, regional and sub-regional conflict-resolution mechanisms throughout Africa is imperative to address a variety of issues including small arms. Peace and development can be achieved in Africa, in part, by exploration of the evolving peace and security architecture within the African Union, ECOWAS, SADC and the Peace Building Commission.

Against this background, I wish to reiterate that collaborative efforts among members of the international community are crucial for addressing our global problems and that international support remains critical for the consolidation of hard-won gains by nations emerging from war. It is our hope that the United Nations and our development partners will continue to be our steadfast allies in our ongoing struggle for economic progress and development. In this regard, I urge that we continue to forge enhanced cooperation between the United Nations and the African Union as well as the sub-regional organizations, beyond rhetoric and in concrete ways, in pursuit of these efforts.

As I intimated this assembly last session, we have come a long way and thanks to multi-lateral and bi-lateral efforts for our survival as a nation. The on-going peacebuilding efforts spearheaded by the UN Peacebuilding Commission continue to strengthen the peace consolidation process in the country. As a payback and in the spirit of reciprocity, I am pleased to announce that Sierra Leone has fully joined the rank of troop contributing countries in UN peacekeeping operations.

Multilateralism is vital for international cooperation and response to global crises. In the bid to promote effective multilateralism, my government has continued to engage the international community to effect various reform measures aimed at strengthening our intergovernmental organizations including, the Bretton Woods Institutions with a view to making them more inclusive, transparent and democratic in their decision making. An effective and legitimate United Nations cannot be obtained without a truly reformed Security Council. The on-going intergovernmental negotiations on the question of equitable representation on, and increase in the membership of the Security Council and other matters related to Council have progressed through three rounds in informal plenary of the last Session of the General Assembly. We, in Africa have consistently demanded that the historical injustice that is rooted in our under-representation and non-representation in both the non-permanent and permanent categories of the council respectively be addressed without any further delay. It is in this respect that we have continued to negotiate in good faith and mutual trust. I trust that the outcome of these negotiations will lead to a meaningful reform of this principal decision-making organ of the UN in the maintenance of international peace and security. We, in Africa stand ready, willing and prepared, as always, to resume negotiations during this session.

Let us promote multilateralism and strengthen our collaborative efforts to contain the rising threats to our planet.

I thank you Mr. President.