“The $3.2 billion China-built railway “promises to one day link together much of East Africa, ushering in a golden era of prosperity for the region…”

That said, the continent has made great improvement over the last 15 years, in the road sector, both in institutional and financing terms.  Kenya, in East Africa, just launched its standard gauge railway (SGR) line to run between Mombasa, East Africa’s largest seaport, and Nairobi. 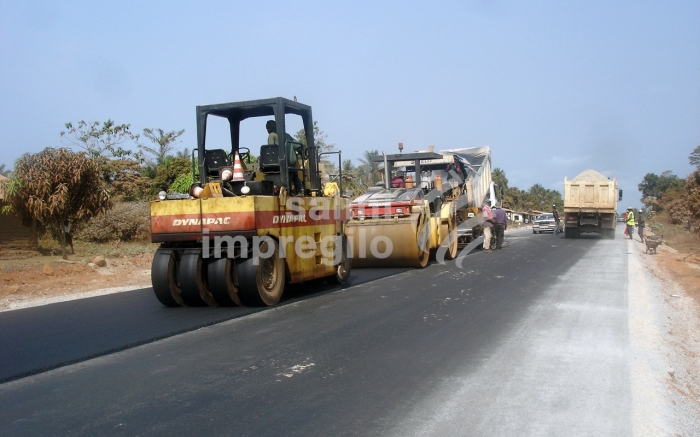 Rehabilitation of roads in the towns of Makeni, Bo, Kenema and Magburaka

The $3.2 billion China-built railway “promises to one day link together much of East Africa, ushering in a golden era of prosperity for the region…” On another positive note, reports further state, “the 470 km line cuts the trip from Mombasa to Nairobi to just four-and-a-half hours, compared to 12 hours aboard the old, outdated railway” (http://shanghaiist.com/ ). This is a leap in economic growth in terms of trade facilitation and movement of people.

Other key factor to growth in road infrastructure is toll roads. They today are an efficient means in tackling traffic congestion and in revenue generation. Third world countries have also taken the challenge, with countries like South Africa, Kenya, Senegal amongst others making   use of tolls, thus contributions to their economic growth.

In Senegal, for instance, the World Bank, in 2008 “estimated that Dakar’s traffic troubles were costing Senegal at least 42 billion West African CFA francs (about US$86 million at the time) per year, or 0.64% of 2008’s gross domestic product.”   The Dakar–Diamniadio toll highway, opened in 2013, brought about “greater use than expected and alleviated congestion in the capital”, helping also in reducing commuting time between Dakar and its neighborhood from above 2 hours to less than 30 minutes. (Source: A New Route To Development: Senegal’s Toll Highway Public-Private Partnership, 2003 – 2013)

Infrastructural transformation, President Ernest Koroma recently said, is “a catalyst for growth and development.” Under his watch, Sierra Leone has seen huge investment in the infrastructure sector especially in roads and other social infrastructure.

In 2016, March, the country’s parliament ratified an agreement for the widening of the Wellington-Masiaka Highway into four-lanes (62 Km) between the Government and China Railway Seventh Group on a BOT platform- to Build, Operate, and Transfer.

The Chinese investors are expected to recover their investment through toll collection during the life of agreement (25 years) before transferring the highway to the government. The road will contain three toll stations with 1/3 of the total toll to be paid and collected at each of the toll stations.

Isaac Sebakijje outlines the benefits for this method.  Toll collection, he writes in Rwanda’s ‘The New Times’ online newspaper “provides an accelerated mechanism for financing construction and maintenance. This is far better than traditional tax based or costly borrowed funds.”

When completed, the Wellington-Masiaka Highway is expected to ease traffic and boost trade through timely and effective business transaction.  It also will lead to an increase in road safety. But we also have to pay a price for this for it is clear, that development goes with a price.

We admire the growth progress nations like Ghana, Rwanda and even Kenya are making, however ignoring the sacrifices they made, and are still making for them to be where they are today. Change of mindset is crucial here and this remains a primary challenge for us as a country.

Again, civil right groups, politicians and the media play are fundamental in all of this. When an opposition politician speaks against a decision he himself took part in, by way of voting in parliament for approval, it becomes another issue altogether.

There is the aspect of public education, which remains vital to development issues like having a toll. But should this only be limited to central government? In my view it should be a collective effort.

Sierra Leoneans should take ownership of their development by leading not from the back. We should not indulge in having our development partners to do all, including what is expected of us for claim of ownership. We have to start somewhere.  The government has provided the leadership, what is required of us is meeting our responsibilities as citizens.

We need good roads, proper housing facilities and good educational institutions, but maintaining the view of getting them cheap or at no cost. This practically is unrealistic and not helpful in our drive to becoming a middle income nation. Let us take ownership of our development process. We just cannot wait.