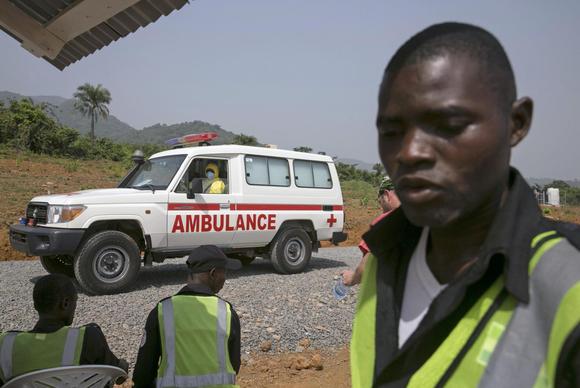 An ambulance transporting a newly admitted Ebola patient drives to the entrance of the Save the Children Kerry Town Ebola treatment centre outside Freetown, Sierra Leone, December 22, 2014.

(Reuters) – Sierra Leone, the country worst affected by Ebola, reported nearly 250 new confirmed cases in the past week but the spread of the virus there may be slowing, the World Health Organization said on Wednesday.

The epidemic has taken 8,235 lives out of 20,747 known cases worldwide over the past year, it said. Overall, 838 health workers have been infected, killing 495 of them.

The WHO’s weekly report was based on figures reported by authorities in nine countries. Guinea, Liberia and Sierra Leone account for the majority of infections and fatalities.

“There are signs that case incidence may have leveled off in Sierra Leone, although with 248 new confirmed cases reported in the week to 4 January 2015, it remains by far the worst-affected country at present,” the WHO said.

Cases are still under-reported and unevenly spread in West Africa. The virus is spreading most rapidly in western Sierra Leone, where the capital Freetown reported 93 of the new confirmed cases, the WHO said.

“An increasing emphasis will be put on the rapid deployment of smaller treatment facilities to ensure that capacity is matched with demand in each area,” the WHO said.

In Guinea, whose capital Conakry remains the worst-affected district, the western prefecture of Fria reported its first Ebola cases.

Ismail Ould Cheikh Ahmed, the newly appointed head of the United Nations Ebola response mission known as UNMEER, warned however against declaring a premature victory against the disease during a visit to Liberia on Wednesday.

“It is only at this moment of optimism and relative success that sometimes we are worried of a sense of complacency,” he told journalists.

Traveling with Ould Cheikh Ahmed, Bruce Aylward, the head of Ebola response at the WHO, echoed his concerns.

“There is still Ebola in Liberia and people are not acting that way,” he said. “There should be a ferocious attention to driving that number to zero and that concerns us a great deal.”

On Thursday, the WHO will host a meeting of representatives from major drug makers, health authorities in affected countries and national regulatory agencies to assess clinical trials of experimental vaccines against Ebola. GlaxoSmithKline, Merck, NewLink Genetics and Johnson & Johnson are testing experimental vaccines.

SAMFORAY LOOKS AT THE IMPLICATIONS OF THE NORMAN CASE

By Tamba Borbor   Thursday June 23, 2005   President Dr. Alhaji Ahmad Tejan Kabbah has said that “without a comprehensive Disarmament, Demobilisation and Reintegration programme, the prospects for long-term […]

Over five hundred passengers were stranded today at the Kissy Terminal here in Freetown. They could not access a ferry to take them to Lungi. Recently, ferries have been plying […]