London (AFP) – Britain asked for foreign help Thursday to battle Ebola in its former colony of Sierra Leone, as a charity warned that five people were infected every hour in the west African nation.

The plea was made at a London conference gathering ministers, diplomats and health officials from around 20 countries and world organisations. Sierra Leone President Ernest Bai Koroma had been due to attend but his plane broke down.

“The UK is leading and coordinating the response in Sierra Leone but we need international help,” Britain’s foreign minister, Philip Hammond, said after the meeting.

A British nurse who contracted Ebola while volunteering in Sierra Leone but survived thanks to treatment, Will Pooley, also attended.

The Save the Children charity urged international action to combat a “terrifying” rate of infection in Sierra Leone, which, with Liberia and Guinea, has been the centre of an unprecedented outbreak of Ebola since the start of the year.

“The scale of the Ebola epidemic is devastating and growing every day, with five people infected every hour in Sierra Leone last week,” said chief executive Justin Forsyth. 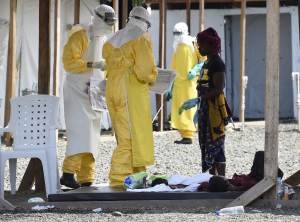 Health workers in protective suits treat a woman and her two children on October 1, 2014 at an Ebola …

“We need a coordinated international response,” the charity said.

Britain has so far provided 143 new treatment beds and promised almost 600 more in the coming months. It is also piloting a way of providing basic care in the community that could eventually reach 10,000 people.

But Save the Children said this was not enough and urged other countries to join the fight, warning that the infection rate could rise to 10 people an hour by the end of the month.

The World Health Organization estimates that more than 2,300 people have been infected and 622 have died from Ebola in Sierra Leone, out of a global toll of more than 7,000 infected and more than 3,300 killed. 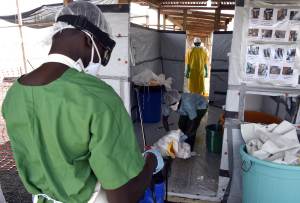 Health workers prepare to enter a decontamination room on October 1, 2014 at an Ebola treatment cent …

Officials warn Sierra Leone is at a “tipping point”, with a current rate of infection at 1.7, meaning that for every 10 people with Ebola, another 17 people become infected.

But the conference got off to a bad start when the plane due to deliver the guest of honour to London broke down.

“The chartered plane he was scheduled to fly on experienced significant technical difficulties prior to take-off,” a Foreign Office spokesman told AFP.

The Liberian and Guinean ambassadors were on the list of participants as well as the Ghanaian deputy foreign minister and representatives from Nigeria, the United States, Canada, Cuba, Japan, Australia, New Zealand and many European Union nations.

British actor Idris Elba speaks to the media ahead of the “Defeating Ebola: Sierra Leone”  …

Britain has pledged £125 million ($200 million, 160 million euros) to help the Ebola fight in Sierra Leone. But prior to the outbreak it had planned to cut aid to the country, according to a new parliamentary report.

The international development committee said the 2014-2015 budget for Sierra Leone and Liberia would have seen bilateral funding cut by 18.6 percent on the previous year.

“The scale of the Ebola crisis now unfolding in Sierra Leone and Liberia may well be connected to declining levels of international support,” said committee chairman Malcolm Bruce.

A spokesman for Britain’s development ministry said the report was “out of date” and noted the planned reduction in funding had been overtaken by events.

This plan includes providing treatment but also training health workers and setting up a central command with military, humanitarian and medical experts to organise the response.

THE LONDON TELEGRAPH
Today London hosted an international summit aimed at raising awareness and funds to fight Ebola.Among the pledges made at the conference at Lancaster House was £70 million from Save the Children, of which £40 million had been earmarked for Sierra Leone.Comic Relief pledged £1 million while GSK donated £300,000 for Save the Children’s efforts in the region. Ebola has claimed claimed 3,091 lives since March [AP]
The UK Government has already promised a further £20 million aid to pay for vital medical supplies including chlorine, personal protection equipment such as masks, protection suits and gloves, and essential water and sanitation facilities.It will also be used to deploy clinicians, global health experts, epidemiologists and infection control advisers from Public Health England, King’s Health Partners and the United Nations.Experts have warned that the outbreak in West Africa has developed at an unprecedented scale with the current rate of infection standing at 1.7, meaning that for every 10 people that contract the virus a further 17 will also be infected.The aim is to get the rate down to one, and eventually below one, in the fight to stop the spread of the deadly disease.More than 40 British military personnel and aid experts are now working in Sierra Leone following a direct request for assistance from the World Health Organisation and the country’s government.

More than 160 NHS staff are also due to travel to Sierra Leone after answering a call for volunteers to help fight the disease earlier this month.

Experts believe they have a 90-day window to halt the spread of Ebola, which could otherwise have infected around 1.5 million people by January.

The death toll from the highly infectious condition, which has spread across Guinea, Liberia and Sierra Leone, has reportedly risen to more than 3,000.

By KABS KANU : Sierra Leoneans and their American friends from New York and New Jersey were yesterday given an eloquent appraisal of comprehensive steps being taken by  President Ernest […]

MEDIA RELEASE Freetown – 11 October 2014 – The Ebola virus disease outbreak in Sierra Leone is continuing to accelerate with a total of 2950 cases reported by October 8, […]