The Service which was attended by thousands of Sierra Leoneans from many states in the United States of America, also saw sympathizers from Europe and Sierra Leone, West Africa.

The Funeral Service which was officiated by Rev. Alaba Max Jones and eight other distinguished Sierra Leonean men of God, was characterized by scripture reading and prayers not only for the faithful departed, but also for the bereaved family not to mourn like people without faith.

The long seats that were placed in rows in the church to seat the congregation were not only full to capacity, but the side walls were also lined by sympathizers of different faiths. In addition, several organizations including All Peoples Congress Party where she was active were represented in their different colours.Several distinguished personalities including Ambassador Bockari Kortu Stevens paid glowing tributes to the late woman. 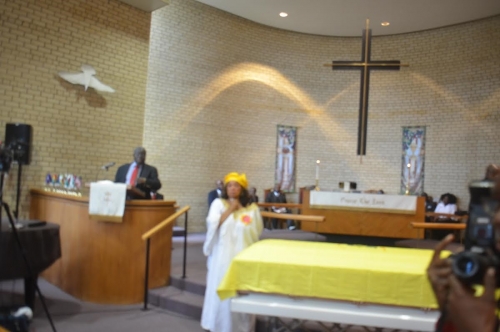 Events like this give an opportunity for introspection, to see how one has positively impacted the lives of others, said Ambassador Stevens, adding that the way the late woman has strongly affected many lives is evidenced by the turnout of sympathizers under the unpleasantly wet weather.

Ambassador Stevens made reference to a call made by President Ernest Bai Koroma to the bereaved family, and admonished them to mourn like people with faith in God.

Madam Elizabeth Mans, President of the APC National Women’s Congress who flew from Sierra Leone to attend the funeral, described the late woman as a dedicated party faithful who will be sadly missed.

She conveyed condolence messages from President Ernest Bai Koroma Leader of the APC, the Secretary General Alhaji Osman Foday Yansaneh including the rank and file of the APC and prayed to God to accept the soul of the faithful departed and also prayed for courage for the bereaved family.

Other members of the family including her brother Ambassador Joe Conteh, her niece Saffie and nephew John Conteh all paid glowing tribute to the late woman, expressing how sadly she will be missed.

In his sermon, Pastor Mustapha Konneh eulogized the late Mariatu Florence Bangura. He heaped praises on the late woman and delved more into her past life exposing her compassion not only for mankind, but also for the House of God.

“At one point in time, the Church has not enough money to pay its rent: she quietly came up to me and said “Pastor, don’t worry, I will pay the rent,”. said Pastor Mustapha Konneh.

In her vote of thanks, Madam Beatrice Conteh sister of the late Mariatu Florence Bangura (nee Conteh) thanked His Excellency Dr. Ernest Bai Koroma, President of the Republic of Sierra Leone and leader of the All People’s Congress Party (APC) for his support by not only talking to the family through the telephone, but also sending a delegation from Sierra Leone to attend this funeral.

She thanked Ambassador Bockari Kortu Stevens and staff of the Embassy of Sierra Leone. Hon. Maya Moiwo Kaikai Minister East, Hon. Alhaji Buya Kamara, APC northern region chairman, Madam Elizabeth Mans, President of the APC Women’s Congress and Hon. Emma Claye Simbo the APC International Relations officer, representatives of the ruling APC Party, who flew from Sierra Leone to not only represent the All People’s Congress (APC) party, but to also demonstrate to the bereaved family that they are not alone.

At the repast, many other organizations which never had the chance to pay tribute to the late woman, were given the opportuni

PRESIDENT AND VICE-PRESIDENT OF MALI ARRESTED , AND THE PEOPLE POUR OUT INTO THE STREETS TO CELEBRATE A COUP IN AFRICA FOR ONCE AGAIN

PRESIDENT AND VICE-PRESIDENT ARRESTED , AND THE PEOPLE POUR OUT INTO THE STREETS TO CELEBRATE Cocorioko Reports Mali’s President Ibrahim Boubacar Keita has been arrested. President Keita was arrested today […]