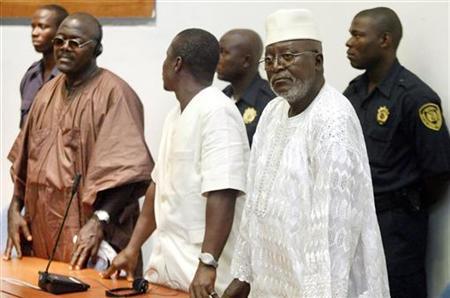 A 2004 file photo shows war crimes suspects (L to R) Allieu Kondewa, Moinina Fofana and Sam Hinga Norman at the U.N.-backed war crimes court in Freetown, June 3, 2004. Sierra Leone’s U.N-backed Special Court convicted Kondewa and Mofana, two former leaders of a pro-government militia, on Thursday for war crimes, but acquitted them of some of the most serious charges of crimes against humanity. Hinga had also been on trial on the same charges but died in detention from heart failure in February.

(Reuters) – Sierra Leone’s U.N.-backed Special Court convicted two former leaders of a pro-government militia on Thursday of war crimes including murder but acquitted them of crimes against humanity.

The pair were leaders of the Civil Defence Forces (CDF), which fought for President Ahmad Tejan Kabbah during a 1991-2002 civil war. Kabbah is due to stand down after August 11 elections in which his deputy is standing as his chosen successor.

Sam Hinga Norman, Kabbah’s former interior minister and head of the feared Kamajor traditional hunters who dominated the CDF, had also been on trial on the same charges but died in detention in February from heart failure after a routine operation.

The verdict was a split decision. Justice Rosolu John Bankole Thompson, the only Sierra Leonean on the three-judge panel, wished to acquit Allieu Kondewa, who prosecutors said was the Kamajors’ “High Priest”, and Moinina Fofana, of all charges.

But the judgment, read in court by Cameroonian judge Benjamin Mutanga Itoe, noted that “The CDF and Kamajors fought for the restoration of democracy”, reflecting the complexity of the case.

Kondewa and Fofana were acquitted of two charges of murder and violence as crimes against humanity, but convicted of war crimes under the Geneva Convention including murder, cruelty and pillage in the judgment.

Kondewa, wearing a loose-fitting pink suit, and Fofana in a beige suit, sat flanked by police officers and sombre-faced throughout the judgment, which took over an hour to read out.

Kabbah, elected mid-war in 1996, must stand down under the constitution after next week’s presidential and parliamentary elections, the first since U.N. peacekeepers left in 2005 and seen as a key test of stability in the former British colony.

He has backed Vice-President Solomon Berewa to succeed him.

The Special Court for Sierra Leone was set up with U.N. backing to try those deemed most culpable for atrocities during the war in which drugged up fighters, often only children themselves, killed, raped and maimed men, women and children.

The court’s most high profile defendant, former Liberian President Charles Taylor, is on trial in the Netherlands charged with instigating murder, rape and terrorism in Sierra Leone.

Taylor is accused of arming rebels in return for gems from the rich eastern diamond fields near the border with Liberia.